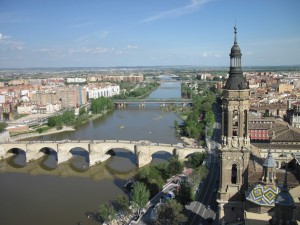 The city of Zaragoza is located in the center of a wide valley in northeast of Spain, bathed by the river Ebro. Its privileged location turns it into an important logistical and communication node, being 300km from important cities such as Madrid, Barcelona, Valencia, Bilbao and Toulouse (France). Zaragoza is a crossroads, a meeting place.

The city offers its guests a rich historical and artistic patrimony, result of its more than two thousand years of history, in which Iberians, Romans, Muslims, Jews and Christians have left their mark on the city. Romans left us as legacy the Walls, the Roman Theatre, the River Port and the Public Baths; while as Muslim testimony we have Aljafería (Palace of Joy), now the seat of the Parliament of Aragón.

In the Cathedral of SEO we find gathered all styles: Romanesque, Gothic, Renaissance and Baroque. And of course, we can not forget the Basilica del Pilar, symbol and emblem of the city, and very important place of Catholic pilgrimage.

Zaragoza has a University whose foundation dates from 1583. Its origins come from the “General Survey of Arts’, set up in 1474 on a former school. Currently, it is divided among several campuses, two of which are located in the inner city. Gastronomy is varied, with dishes prepared with regional products such as “longaniza de Fuentes” (spice pork sausages), “cordero a la pastora” (lamb), “ternasco asado” (lamb) and “lomo de cerdo a la Zaragozana” (pork). In addition, we can find a large list of wines of great quality. In essence, Zaragoza is a city where you can breath culture strolling through the streets or taking a “pincho” in the bars of the historic center.